Don’t sleep yet,
Or you may regret…
The sight will be magical
When the first ray sings ‘that’ chronicle

Like a bride she walked
Of her wealth , they talked
Ancient was her pride
Glorious every stride …

A blanket of dust covers the truth now
To establish Dharma again, is Lord’s vow
Though the night has never been darker
And the goal has never looked further,

But morning is near
I hear the Temple bells, so clear
Few more hours of toil
A sacrifice, so worth for ‘my soil’

You want to watch it right!
I too, want to admire the sight.
Don’t sleep yet
Or you may regret…

For this vision will be a gift for those
Who kept awake until the last
ray of hope ..

Till the very last breath we shall fight
Dying for the nation is a delight
Living with might, living for the right
Is the very purpose of life ..

I won’t sleep yet
so that I find no reason to regret . 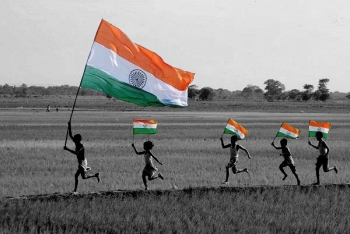