Without the light of knowledge in one’s life, life remains like a directionless ship in a dark sea, lost in unknown purposelessly. This fact was understood by the people of our land since time immemorial and so they gave the name “Bharatha” to our land. Our country India is one in which knowledge has been regarded as supreme. ‘Bharath’- Bha means Light or Knowledge, Ratha means Immersed, Rathi also meaning delight. Bharatha- A Land and it’s people immersed in knowledge, a name given for the quality of people and their land (Extract from Bharath Gyan https://m.youtube.com/watch?index=1&list=PL9QLcyiVla35S_9PUMq0PRuLejVPXZYvu&v=LO8ZMbNqJMk).

The light of knowledge has been carried by the tradition of our masters, by our Guru’s from the very inception of our civilization, from several thousand years to us. Our revered masters dedicated their lives for the upliftment of human beings by introducing to us a broader dimension of existence. They have gifted us great values by setting examples from their own actions. 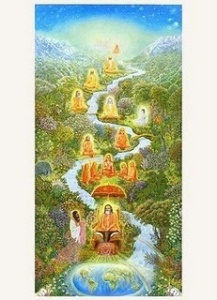 Human life can be a constant struggle without knowledge.The mind, intellect and Ego have their limitations and are over powered by their own negative tendencies, which the mind refuses to let go. I often say that to train the human mind can be as difficult as training a dragon. Choices can be confusing and one can be surrounded by a constant dilemma of the right and wrong, good and bad, should and should nots.

The knowledge in our scriptures is like a road map that makes our life’s journey comfortable and smooth. But Wisdom remains locked like in secret chambers in these sacred texts until a proficient master reveals it for his student.
And so Upanishad is required. Upanishad means- Sitting close or mental proximity between the teacher and his student- As Gurudev explains- “Knowledge can only flow when a student has faith in the teacher’s wisdom and the teacher has faith in the potential and sincerity of the student”. Without faith and respect in one’s Guru, the flow of knowledge is not possible, It would be like trying to climb Mount Everest being blindfolded, I feel it would be next to impossible!

I often wonder, If I weren’t bestowed by the rare blessing of having SatGuru, Sri Sri Ravishankar ji, in my life how would I have had access to this mystical world. By putting the sutras into simple words, supporting them with examples of today’s world he has proved the relevance of this timeless wisdom for my own life. Gurudev encouraged me to have a scientific approach ask questions and have faith in my own experiences and that’s how he helped me to move ahead from one level to another, step by step patiently.

The unconditional love of a Guru and his infinite patience for his disciple is like the love and care of a mother for her child. So much so that a person without a Guru in the olden times in India was called Anatha. What award can we give to our mother or to the Guru for their contribution in our lives! What ever we give them will be trivial for their unconditional love. But I feel, we through our actions can at least demonstrate utmost respect for this invaluable legacy for our future generation to learn from, isn’t it! Like when I recently visited a friend’s marriage at a Gurudwara and was pleasantly surprised seeing the bride and the groom taking their marriage vows around the Guru Granth Sahib(the central religious text of Sikhism). I thought to myself that it was a tradition to learn from, where Guru was given utmost respect.

This respect is lacking in the world today. Doubts have overtaken faith. And we are not being able to distinguish Sugar and Sand. The Guru principle and the great traditions of masters has often been belittled by the expressions of our near and dear ones, in films, our communication , in writings etc, this is an act of ignorance! And so education is needed. There are a few who have fallen the ladder but they cannot be compared or said to be akin those who have given their entire life for the sake of upholding human values. Who have kept the torch burning and alive even through the darkest night.

As we move pass another dark night when Life faces many challenges from the evils that have cropped up like monsters in the world today. Wrong knowledge and negative tendencies cloud the minds of human beings, driven towards destruction and violence. Today when the world is on such a cross road, its time we need to reflect upon truth, learn and bow down from the past traditions!

Bharatha will truly stand for it’s name again when we the people of this land revere knowledge and the Guru with all our heart . This is a firm belief of a devotee and a patriot. 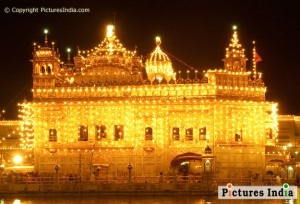 Reverence for my master for having lighted up lamps of knowledge on my path. Without which my life would remain incomplete, over shadowed by the blinding darkness of the world.

3 thoughts on “A firm belief.”