A surprise birthday party in my tree house

Jasin and his family went to their tree house to spend their summer vacations.

The house was made over tree trunks and it was located in the middle  of a forest, so it was very special.

It was Jasen’s birthday on 21st June (which fell in the middle of these vacations) and his Grand mother decided to give him a surprise. His Grandmother was sanding on the bridge and saw many fruits hanging over the trees around her. And she got an idea. The idea of making a fruitcake for Jasin as he loved eating fruits.

His Grandmother called everyone and said to his cousins “while we prepare the food, you keep Jasin distracted, so we can give him a big surprise”. And Jasin’s Grandmother and his mother got on to preparing the food.

His cousins occupied Jasin’s attention by taking him on a boat ride and taking him up and down from the luggage carrier. And they also took him to play on the swings.

It became dark and the Grandmother helped in laying the food and decorating the biggest tree house. 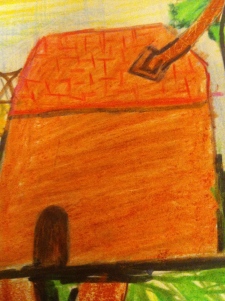 They blind folded Jasin and got him to the room. And when Jasin opened his eyes, he got the most pleasant surprise ever. The family had a very nice party and had a lots of fun too. His family gifted him a telescope as his birthday gift. And Jasin did star gazing all night with his cousins.

This was the most memorable birthday Jasin every had in his life.

Story written and illustrated by