Five cars honking at the same time, while passers gave me a look with utter disgust, oops!! I was in a no entry, zooming my car in the wrong direction.
I cursed the stranger in my heart, for having told me a wrong way. With fear in my heart, not wanting to get caught, I took a U turn and slowly made my way in the lane before .
Oh! Here comes the temple.. and comes the signal after that … and now the right turn opposite the state bank… and yes I reached my destination… The Heart said – ‘Sorry stranger – Oh my God! This is the way what you meant?’
Story two 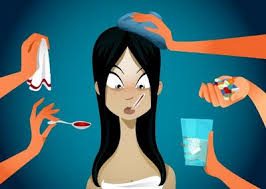 I Have been popping the same medicines for days, and every time I ask the doctor, he says ‘continue, continue with the same medicines for few more days’. But nothing seems to be improving in me!
“So what if he is our family physician? He too is a human first , prone to the weaknesses like greed. He surely gets commissions for prescribing these medicines.. Who knows?? I will be alright anyways, let me give these up!”

I left the medicines but the ulcers increased and so did the pain,so much so that it could not have been worse …. Heart said- ‘Sorry doctor – Oh my God! A precaution is what you meant? ‘

‘I won’t allow you, no matter what. These two wheeler’s are too risky! Don’t you read the newspaper everyday!? So many accidents are reported every day.’
“But father, But, But…..”

‘This is the final decision! You will not get a bike, that’s it!’

“Who says he is a father, he is a Hitler. He has no clue about the reality, just makes too much fuss. All my friends have two wheeler’s..”
One of those beautiful rainy days, me and my friends zoomed on his bike enjoying life to its fullest, I closed my eyes to save the moment in my mind..They say, I opened my eyes much later, at the hospital…  “What happened how did I reach here?” , they said it was that biggest pot hole we crashed into, we became unconscious immediately .. Heart said -‘ Sorry father- Oh my God! This likelihood is what you meant?’
“My” Story four

Me- “Guru? Why do I need a Guru in life? I can teach the world “The Art of Living” myself..
The words of wisdom from elders , the laws of dharma taught by saints, yoga, meditation all sounded obsolete to me.

Until one day, when my Guru found me and I started my journey on the spiritual path and it all started making so much sense.
And even now, after fifteen years of walking the path, A feeling of wonder constantly knocks the door of my heart ‘Oh my God! Having a Guru, this is what it meant?? ‘

I am sure many such stories unfold in every life, when the meaning of words are revealed much later. They remain like those codes which never popped on the screen of life. And we reject them thinking they are untrue or unwanted, isn’t it.. 🙂

Doesn’t matter if these stories do not make any sense to you, sometime in future it may happen that the chord gets struck (like it did for me) and you say – ‘Oh my God!THIS IS WHAT YOU MEANT..’
Until then keep Smiling 😉 🙂